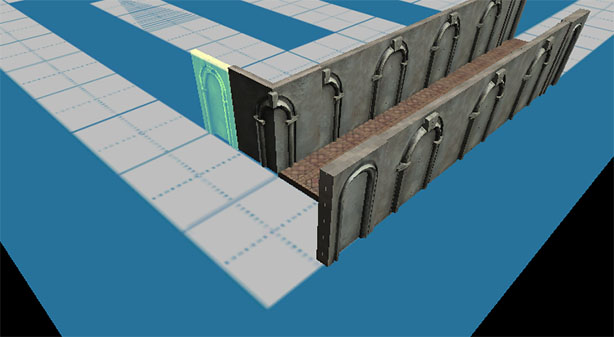 As much as I liked the idea of drawing walls by following the mouse—allowing the user to turn corners while adding walls—it was too much like drawing a straight line with a mouse in MS Paint. I’ve opted instead to restrict the wall addition to a single axis. That is, as the user starts adding north a facing wall and moves the mouse either east or west, new north facing walls are added.

A couple of other new additions, when adding walls both sides of the wall are added, e.g. when adding east facing walls, the corresponding west facing wall is added. (See also, Splitting Walls.)

You can add floors now, too. Currently, floors are added when clicking on the center of the square, rather than on edges. I’m considering spltting walls and floors into two separate modes. We’ll see how that plays out when I add new terrain pieces and types.

There’s a new UI element, as well. You can now see what type of piece you’re adding before starting construction. With the right mouse button, you can also remove existing pieces.

Continuing to use the Big Map as my test, the time to build has been significantly reduced. With the new method of adding pieces, it’s much easier and faster to add them with the map zoomed out. The video below has been sped up, so you don’t have to watch it in realtime. The total time to draw what you’ll see is just under a minute.